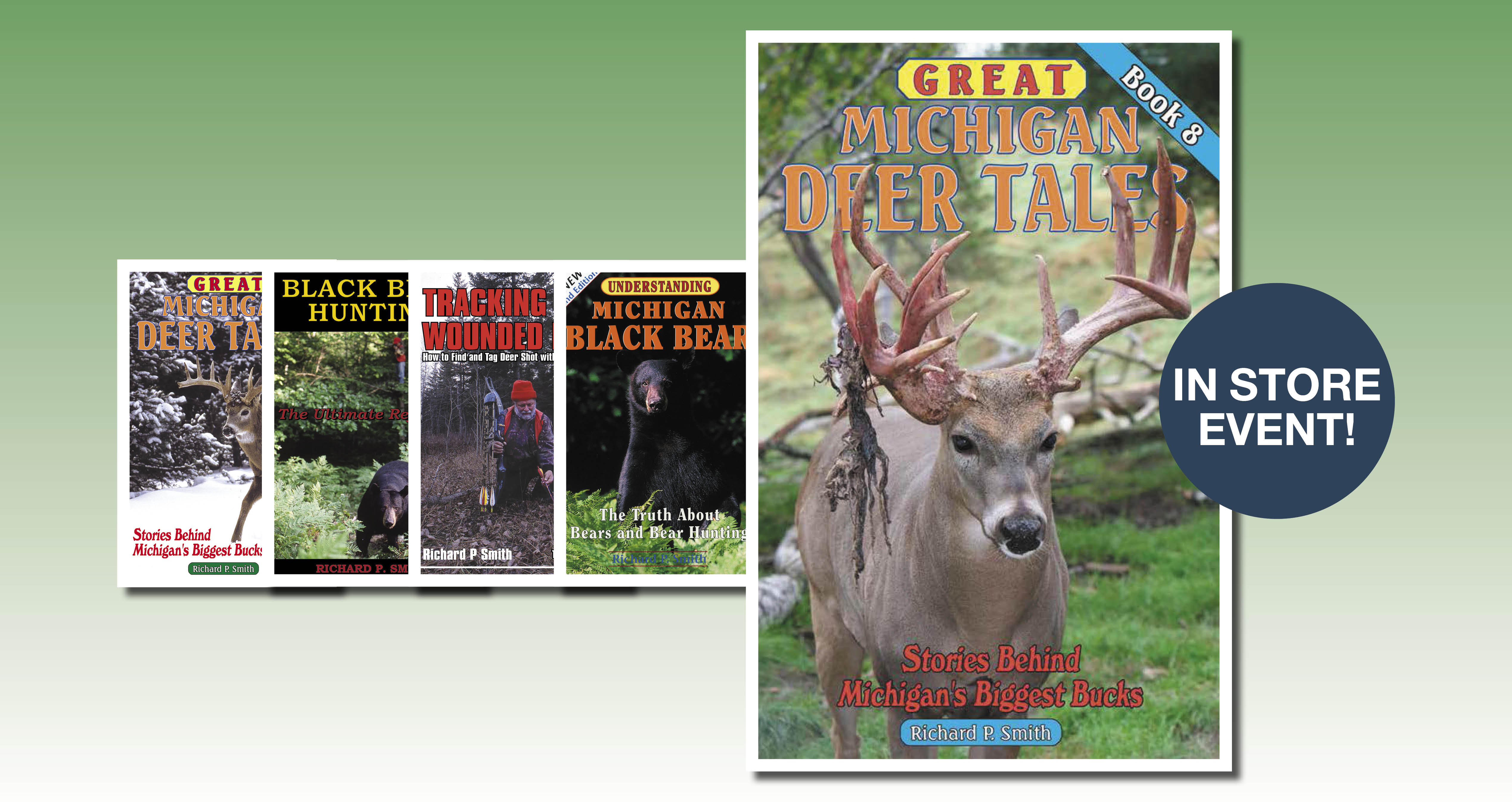 About the Book
Book 8 has 17 chapters compared to 15 in each of the previous seven volumes in this series about the biggest bucks bagged by hunters in Michigan, and some of the chapters cover multiple bucks. Each of the chapters in this book, like the others, were carefully selected to be both entertaining and educational.

This book isn’t just about big bucks though. One of the chapters is about one of Michigan’s most successful deer hunters, who shot bucks 70 years in a row. This UP hunter is now more than 90 years old and has more than 100 whitetails to his credit, all of which were shot for the quality meat they provide instead of the size of their antlers. Another chapter is about one more of the state’s most successful deer hunters who has taken trophy bucks from the same 52-acre parcel of land he owns 36 years in a row.

There’s one more chapter that proves it’s not necessary to protect spike horns in order to produce plenty of older age bucks. That chapter is about a bowhunter’s exceptional success on bucks that were at least 4 ½ years old in Gogebic County between 1985 and 1995 when spike bucks were legal to all hunters and there were far more hunters during that decade than there are today.

You will learn the how, where and when behind every kill as well as who got these special deer.

About the Author:
Richard P. Smith is an award winning outdoor writer and photographer living in the Upper Peninsula (UP) of Michigan who has been hunting whitetail deer and black bear for more than 50 years. The author/photographer is a recognized expert on whitetail deer and black bear behavior and biology as well as hunting these popular big game animals. He hasinterviewed the top bear biologists in the country and accompanied them in the field on their research. Most of the books and DVDs he’s produced have been about deer and black bear. One of his more prestigious honors was receipt of the coveted Ben East Prize for 1997 from the Michigan United Conservation Clubs for conservation journalism about bear management. He also received the Outdoor Journalist of the Year Award from the Flint, Michigan Chapter of Safari Club International the same year. Smith received those awards because many of his articles helped defeat a referendum that would have had a negative impact on bear hunting and management in Michigan.

He’s produced two DVDs. One that is an excellent reference for black bear hunters titled Field Judging Black Bears. A 90-minute DVD titled Walking With Whitetails that Smith filmed and produced with the help of his wife, Lucy, is educational and entertaining for anyone interested in learning about whitetail deer. This popular animal’s year-round behavior is featured and includes some unique clips of deer behavior that few people have been fortunate enough to see. Clips that Smith filmed over a period of nine years while walking with does more than 10 years old and bucks up to 41⁄2-years-old went into producing this DVD.

His best typical whitetail is a Saskatchewan 10-pointer he got in 1999 that qualified for honorable mention in Boone and Crockett Records with a net score of 163 7/8. Prior to that, he bagged a nontypical 12-pointer with a 9-inch drop tine from the same area that netted 165 3/8. During 2010, he connected on another Saskatchewan nontypical with 13 points that gross scored 171 3/8. His best Michigan buck is a typical 11-pointer he shot on public land in the Upper Peninsula (UP) that nets 148 4/8. He’s taken a number of other bucks that score in the 140s.

During the spring of 2002, Richard bagged a huge black bear in Saskatchewan with a .45 caliber Knight Super Disc Muzzleloader that is the second highest scoring black bear in national muzzleloading records maintained by the Longhunter Society. The bruin’s skull officially measures 21 14/16, also qualifying for a spot in Boone and Crockett Records. He was hunting out of Lone Wolf Camp operated by Brian and Shelly MacDonald when he got the trophy bear. A full mount of the animal completed by Outdoor Ventures Taxidermy in Marquette is on display at a Cabela’s Store in Hamburg, Pennsylvania that opened in 2003. Since then, he collected two more trophy Saskatchewan bruins with a muzzleloader that qualify for honorable mention in Boone and Crockett Records, with skulls scoring 20 2/16. Richard has four trophy bruins in Pope and Young Records that he got with bow and arrow and he also took three book bears with a muzzleloader in Michigan.

He is the second person in Michigan to collect a CBM Grand Slam. To complete such a feat, a hunter must shoot deer, bear, elk and turkey that qualify for listing in state records maintained by Commemorative Bucks of Michigan (CBM). It took Smith a lifetime of hunting in the state to achieve the goal. His slam was completed on November 3, 2000 when he bagged a turkey that qualified for CBM records. Only 9 hunters had achieved a CBM Grand Slam as of 2018, which shows how difficult an accomplishment it is.

The head mount of a snarling black bear that Smith shot with bow and arrow during 1974 plays a prominent role in the movie “Escanaba In Da Moonlight.” The movie was filmed in and near Escanaba, Michigan during 2000 and is now available on DVD and video. A screen-filling image of the bear head appears near the beginning of the movie as well as in a number of later scenes as it hangs on the hunting camp wall depicted in the film.