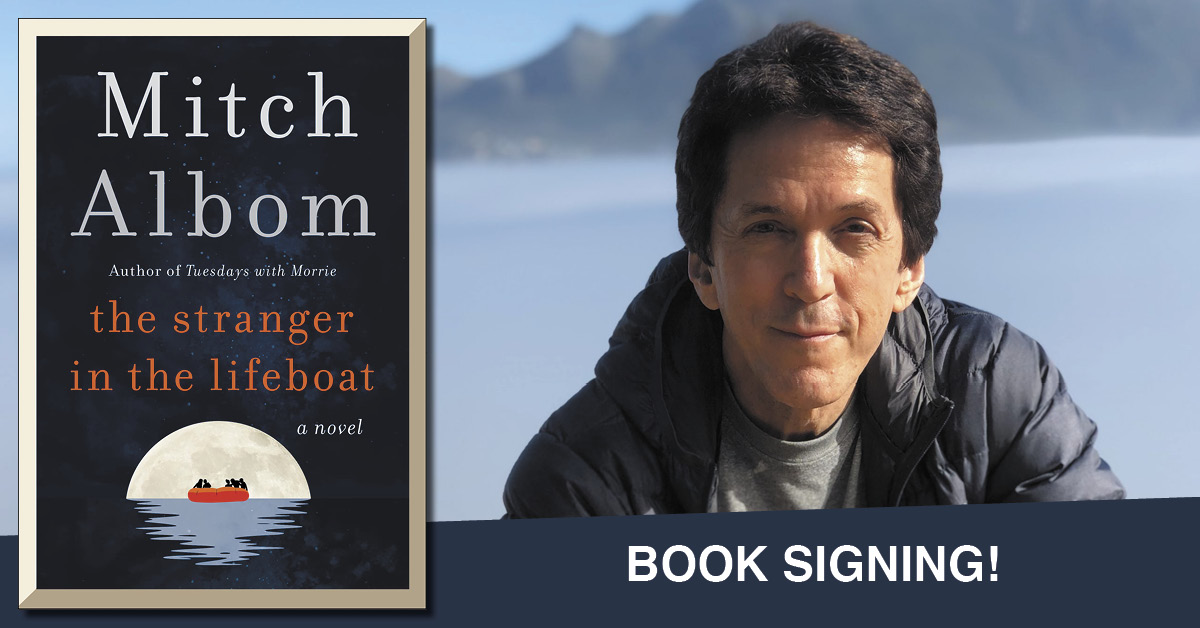 Join us at Schuler Books Okemos for an in-store signing with Mitch Albom! All guests must pre-register and purchase a copy of the book here.

Mitch will be signing only copies of The Stranger in the Lifeboat purchased through Schuler Books.

For the health and safety of the author and guests all attendees must wear a mask. Line will form no earlier than 30 minutes prior to signing. No photos allowed.

What would happen if we called on God for help and God actually appeared? In Mitch Albom’s profound new novel of hope and faith, a group of shipwrecked passengers pull a strange man from the sea. He claims to be “the Lord.” And he says he can only save them if they all believe in him.

Adrift in a raft after a deadly ship explosion, nine people struggle for survival at sea. Three days pass. Short on water, food and hope, they spot a man floating in the waves. They pull him in.

“Thank the Lord we found you,” a passenger says.

“I am the Lord,” the man whispers.

So begins Mitch Albom’s most beguiling and inspiring novel yet.

Albom has written of heaven in the celebrated number one bestsellers The Five People You Meet in Heaven and The First Phone Call from Heaven. Now, for the first time in his fiction, he ponders what we would do if, after crying out for divine help, God actually appeared before us? What might the Lord look, sound and act like?

In The Stranger in the Lifeboat, Albom keeps us guessing until the end: Is this strange and quiet man really who he claims to be? What actually happened to cause the explosion? Are the survivors already in heaven, or are they in hell?

The story is narrated by Benji, one of the passengers, who recounts the events in a notebook that is later discovered—a year later—when the empty life raft washes up on the island of Montserrat.

It falls to the island’s chief inspector, Jarty LeFleur, a man battling his own demons, to solve the mystery of what really happened.

A fast-paced, compelling novel that makes you ponder your deepest beliefs, The Stranger in the Lifeboat suggests that answers to our prayers may be found where we least expect them.

Mitch Albom is the author of numerous books of fiction and nonfiction, which have collectively sold more than forty million copies in forty-seven languages worldwide. He has written seven number-one New York Times bestsellers – including Tuesdays with Morrie, the bestselling memoir of all time, which topped the list for four straight years – award-winning TV films, stage plays, screenplays, a nationally syndicated newspaper column, and a musical. Through his work at the Detroit Free Press, he was inducted into both the National Sports Media Association and Michigan Sports halls of fame and is the recipient of the 2010 Red Smith Award for lifetime achievement.

After bestselling memoir Finding Chika and “Human Touch,” the weekly serial written and published online in real-time to raise funds for pandemic relief, his latest work is a return to fiction with The Stranger in the Lifeboat (Harper, November 2021). He founded and oversees SAY Detroit, a consortium of nine different charitable operations in his hometown, including a nonprofit dessert shop and food product line to fund programs for Detroit’s most underserved citizens. He also operates an orphanage in Port-Au-Prince, Haiti, which he visits monthly. He lives with his wife, Janine, in Michigan. Learn more at www.mitchalbom.com, www.saydetroit.org, and www.havefaithaiti.org.