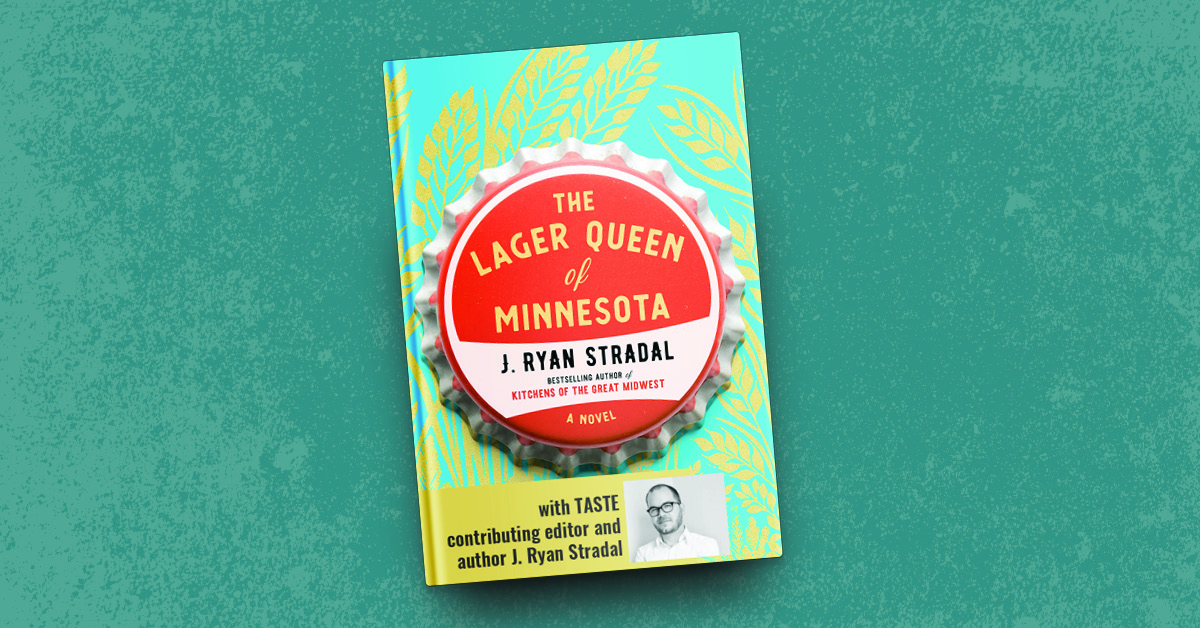 Creston Brewery and Schuler Books are partnering on a very special Pints + Pies Pairing in Beer City! We welcome contributing editor of TASTE and New York Times Bestselling author J. Ryan Stradel who will be presenting his new book The Lager Queen of Minnesota with a beer and pie tasting! Tickets are $55 and include six pie + beer pairings, appetizers, and a signed copy of The Lager Queen of Minnesota. Only 50 tickets available.

A novel of family, Midwestern values, hard work, fate and the secrets of making a world-class beer, from the bestselling author of Kitchens of the Great Midwest.

Edith Magnusson's rhubarb pies are famous in the Twin Cities--they were named the third-best in the state of Minnesota and St. Anthony-Waterside Nursing Home has quickly becomes the hottest dinner ticket in town. Still, she lays awake wondering how her life might have been different if her father hadn't left their family farm to her sister Helen, a decision that split their family in two.

With the proceeds from the farm, her sister, Helen Blotz, built her husband Orval's family soda business into the top selling brewery in Minnesota. She singlehandedly created the light beer revolution and made their corporate motto ubiquitous: "Drink lots, it's Blotz." But Helen dismisses IPAs as a fad, and the Blotz fortune begins its inevitable decline. Soon, though, she finds a potential savior that's surprisingly close to home. . .

Diana Winter earns a shot at learning the beer business from the ground up just as the IPA revolution begins. The stakes couldn't be higher: just as she's launching her own brewpub, she's due to deliver a baby girl. When the unthinkable happens, it's up to Grandma Edith--and a delightfully surprising cadre of grandmother friends--to secure the next generation's chances for a better future. Can Grandma Edith's Rhubarb Pie In A Bottle Ale save Diana's fledgling brewery, and change their hearts and fortunes forever?

The Lager Queen of Minnesota serves up a cast of lovable, quintessentially Midwestern characters eager to make their mark in a world that's often stacked against them. In this deeply affecting, humorous, emotional family saga, resolution can take generations, but when it finally comes, we're surprised, moved, and delighted.

He grew up in the Midwest, in the southern Minnesota town of Hastings, where he often failed his driver's license exams, and graduated from Northwestern University, where he often slipped on the ice. He does not own a gun or a motorcycle, which makes him unique among the men in his extended family.

His second novel, The Lager Queen of Minnesota, will be published by Viking / Pamela Dorman Books in July 2019.

So far, Kitchens has been acquired for publication overseas in twelve countries (Brazil, Finland, France, Germany, Holland, Israel, Italy, Korea, Poland, Spain, Sweden, and the United Kingdom). Back in November 2014, before it was published, the Pirate's Alley Faulkner Society awarded Kitchens of the Great Midwest first prize in their annual novel competition. He's extremely grateful for the places that put it on their 2015 best-of lists.

A selection of his short stories, compiled under the title "Nerd & Whore are Friends," was a 2013 finalist in the Dzanc Books Short Story Collection Competition. His short fiction has also been anthologized    and named a finalist for the James Kirkwood Literary Prize.

Since January 2017, he is a contributing editor at TASTE. Previously, he was the fiction editor at The Nervous Breakdown from 2013 to 2016, and an editor-at-large at Unnamed Press in Los Angeles from 2015 to 2017. He was  also co-editor, with Adam Cushman, of  Critically Acclaimed, a compendium of "real reviews of fake movies," published by Rare Bird in January 2018, and editor of the 2014  California Prose Directory, an anthology of writing about California by California writers, published by Outpost19.

He volunteers for & is on the advisory board of the educational non-profit 826LA. He's also helped create products and materials for their affiliated store, the Echo Park Time Travel Mart.

He has often worked in television, story editing or producing shows for VH-1, MTV, ABC, FOX, TLC, A&E, Discovery, and History. Working primarily for Original Productions from 2008 to 2014, he was the senior story producer on “Deadliest Catch” and “Ice Road Truckers” and a supervising producer on “IRT: Deadliest Roads,” "Storage Wars," and “Storage Wars: Texas.”

He was also associate producer on Chad Hartigan's film “This Is Martin Bonner,” which won the Audience Award for Best of NEXT at the Sundance Film Festival in 2013.

The Lager Queen of Minnesota: A Novel (Hardcover)